Showing posts from September, 2013
Show all

Listening to … Some really fascinating history podcasts; think my favourite one is The Historyof WWII by Ray Harris, but the British History Podcast by Jamie Jeffers comes in at a very close second. Eating...   Ate some amazing brazed lamb shank last night; it was so good, but mind you, my friend Alison is a really good cook. Watching... As I am writing this, I am watching the season 5 finale of Top Chef Masters, but am going to watch another show to clear off my PVR a little bit this morning. Reading...   Today I am planning to read a bunch of Harry Potter and the Order of the Phoenix, read a couple chapters of Agnes Grey, and start The Book Thief. Making... Other than some breakfast, probably not much Planning... To do a little cleaning sometime this afternoon; floor needs to be vacuumed and some other things need to be done. Feeling... A bit tired, but with some coffee and some food, I should wake up. Loving... That the power hasn’t gone out Wanting... T
Post a Comment
Read more 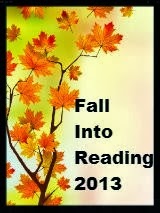 This is my third year participating in this annual fall reading session and each year I enjoy it more and more.  I don't think I was thinking about this past August, but when Musings of a Book Addict put up a post that she would be hosting the event this year, I knew that it was coming up and started to think about the books that I would probably read this coming fall. And when I did think about it earlier today, this years list is going to be a bit longer than last years.  Part of the reason is that the number of books that I am currently reading and am hoping to complete more than I did last year.  Maybe I should aim low like I did last year so as not to be disappointed when my list isn't complete when winter starts. But in any case here is my list: • The Thorn Birds • Northanger Abbey • War & Peace • Agnes Grey • The Count of Monte Cristo • Vilette • Harry Potter and the Order of the Phoenix • The Snow Child • The Light Between Oceans I will try to upda
Post a Comment
Read more

It's Monday! What Are You Reading? is a fun weekly meme that is hosted by   Shelia at Book Journey , in which we share what we've read and reviewed and what we plan on reading in the coming week. What I have reviewed since the last post: 1) The Sandcastle Girls by Chris Boh jalian ( review ) 2) Mr. Churchill's Secretary by Susan Elia MacNeal ( review )  3) The Paris Wife by Paula McLain ( review ) 4) The Life and Times of Call the Midwife by Heidi Thomas ( review ) 5) The Dinner by Herman Koch ( review ) 6) A Game of Thrones by George R.R. Martin ( review ) 7) Dearie by Bob Spitz ( review )  8) Emma by Jane Austen ( review ) 9) Wives and Daughters by Elizabeth Gaskell ( review ) 10) Sense & Sensibility by Jane Austen ( review ) 11) Moby Dick by Herman Melville ( review )  What I am planning on reading this week: • Agnes Grey • Harry Potter and the Order of the Phoenix • The Count of Monte Cristo • The Light Between the Oceans • The Thorn Birds
Post a Comment
Read more

Book podcasts that I listen to

One of the favourite things I have loved doing during the past few years is listening to podcasts on a wide variety of topics.  Most of the podcasts that I listen to are historical based, but I do listen to a number of book based podcasts.  I am not saying that you have to listen to these podcasts, but am only recommending them for those that may be looking for something to find book recommendations from. New York Times Book Review - its the only podcast that I subscribe to that comes from a news entity.  There are a number of these types of book reviews, but thing that I like about this podcast is that there usually is an interview or two about a particular book with either the author or the person who wrote a book review for the New York Times.  They also have "Notes from the Field", which looks at the news from the book world and whatever gossip is floating around.  They also look at the NYT bestseller list and point out any new or notable books that are hitting t
Post a Comment
Read more

Sunday Salon - Reading the week away

I love this time of year out here in the Lower Mainland.  Its weather that I usually look forward to because not only is the weather still nice, but its much cooler than it is during July and August.  But for some strange reason, there was some really stormy weather over a couple of evenings, that included a couple of lightning storms, which is unusual for this time of year, but the weather looks like its going to going to improve over the next few days and the next week or two looks like typical late summer weather, even though the leaves are clearly starting to turn.  Its also weather that I can still go outside and spend an afternoon in the sunshine working on my tan before the warmth of the sun fades into the fall and winter months before returning sometime late in spring, if it hasn't decided to rain for days on end (there is a reason that the corner of the world that I live in is called a temperate rainforest). Due a number of factors, I basically ended up reading for mo
Post a Comment
Read more

Title: Moby Dick, or The Whale Author: Herman Melville Pages: 640 Published: 1998 (originally published 1851) Challenges: Back to the Classics, Chunkster, The Classics Club, Embarrassment of Riches, Off the Shelf Genre: Adventure, Classics, Fiction, Literature Edition: Mass Market Paperback Source: Personal Description:  Over a century and a half after its publication, Moby-Dick still stands as an indisputable literary classic. It is the story of an eerily compelling madman pursuing an unholy war against a creature as vast and dangerous and unknowable as the sea itself. But more than just a novel of adventure, more than an encyclopedia of whaling lore and legend, Moby-Dick is a haunting, mesmerizing, and important social commentary populated with several of the most unforgettable and enduring characters in literature. Written with wonderfully redemptive humor, Moby-Dick is a profound and timeless inquiry into character, faith, and the nature of perception. (via G
Post a Comment
Read more

Title: Sense and Sensibility Author: Jane Austen Pages: 409 Published: 2003 (originally published 1811) Challenges: The Classics Club Genre: Classics, Fiction, Literature Edition: Paperback Source: Personal Copy Description:  Marianne Dashwood wears her heart on her sleeve, and when she falls in love with the dashing but unsuitable John Willoughby she ignores her sister Elinor's warning that her impulsive behaviour leaves her open to gossip and innuendo. Meanwhile Elinor, always sensitive to social convention, is struggling to conceal her own romantic disappointment, even from those closest to her. Through their parallel experience of love—and its threatened loss—the sisters learn that sense must mix with sensibility if they are to find personal happiness in a society where status and money govern the rules of love. (via Goodreads) Thoughts:  Definitely one of my favourite books and classics at the same time.  This was my second time reading the book (I realiz
Post a Comment
Read more

Even though summer isn't really over for at least another few weeks in the northern hemisphere, one is starting to feel as though it is, especially with school starting for many students in North America on Tuesday morning and the leaves starting to turn and with theatres starting to advertise the movies that are scheduled to come out during October and November.   It also means that the NFL, NHL, and the NBA are going to start within the next couple of months, with College Football just having started with the boys of summer looking forward to the stretch drive and playoffs in October and for most people, it means evenings come sooner and are generally cooler and people start looking for the clothes that were long put away that will be needed once the cooler weather starts up again.  It also means that Christmas is closing in on us and people will start be making plans for that time period. It also means that I get back into my blogging routine, which has basically been lackin
Post a Comment
Read more
More posts