Book Description: In medieval San Gimignano, Italy, daughters of merchants are expected to marry. But Santina Pietra cares only for Calandrino, a brilliant young scholar who is preoccupied with his ancient alchemical texts.
Soon Santina meets Trotula, the village midwife, who might or might not be a "strega," a witch. Trotula challenges her to forget Calandrino and become the woman she is meant to be. Some say she is a victim of the midwife’s spell, but Santina is determined to follow in Trotula’s footsteps even as calamities strike.

Thoughts: While it took me awhile to actually sit down and read the book, once I started the book, I felt engaged with Santina and the other characters in the book.  My favourite character was Trotula, as she took no nonsense from Santina and expected her to eventually figure things out on her own.

I really liked the setting, as it wasn't a typical Italian setting and didn't really take place in a typical period for fiction set in Italy, which is usually the Renaissance or during the Roman Empire, but set in an era that little is known about.   The plot flows well and seems to flow seamlessly, all the while keeping the reading engaged with the characters and the author made me feel as though I should care for Santina and really rooted for her and also empathized with her.

If there was one thing that I didn't really like it was that I felt that the language was a little simplistic for me as a reader and felt that it was more geared to readers coming out of middle grade fiction and looking for something a little more difficult, but not too difficult, even though the main characters are in their late teens/early twenties.  I really liked the inclusion of the three maps at the beginning of the book, allowing the reader to know where the story takes place.

Bottom line: Overall, it was a good book and nice break from the densely packed adult fiction that I read on a regular basis and would be a really good read for those readers that are transitioning out of middle grade books into young adult book.  Or for those of us adults who enjoy a break from the denser fiction or who just want a nice, easy historical fiction.  And for parents that are worried about the content, the book is clean and has no language or sexual issues that could find myself.  Highly recommended. 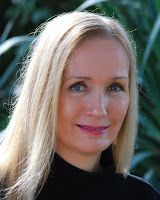 Mary A. Osborne is the multiple award-winning author of Alchemy's Daughter and Nonna’s Book of Mysteries. A graduate of Rush University and Knox College, where she was mentored in the Creative Writing Program, Ms. Osborne is a registered nurse and holds degrees in chemistry and nursing. Her freelance work has appeared in publications such as Hektoen International, Newcity, and the Examiner.com. Ms. Osborne lives in Chicago.
Connect with Mary: Website  ~  Facebook  ~  Twitter

Where to buy the book:
Amazon
Barnes & Noble
Book Depository

Books I finished last week:
Nothing; seemed to be stuck on the same book and I couldn't find anything that I wanted to read.  I was also pretty busy throughout the week that by Friday evening, all I wanted to do was watch something that wasn't on my PVR.  I am hoping that I am able to finish a book or two this week.

Books reviewed this week:
1) I Am Half-Sick of Shadows by Alan Bradley (review)
2) Eleanor & Park by Rainbow Rowell (review)