Showing posts from November, 2013
Show all

Since I am going to see Catching Fire this evening, I thought I would get my starting post up before I leave.

I am really looking forward to this and I am hoping to get lots of reading done over the next few days, but depending on what I end up doing, it could be a bit of bust.  But I am going to try nonetheless

Here are what I am planning on reading: 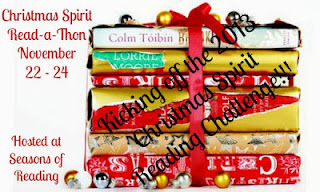 To say the least it was a bit of a bust.  True I did manage to finish two books during the readathon, but only one was Christmas-themed and that one was basically finished and the other book that I finished was very close to completion.  It was a weekend that I ended up with little time to read, at least on Saturday.  And by Sunday, I really didn't feel like reading much.

I realize that this was supposed to be a "relaxed" readathon, but honestly when I only really have a couple of days of reading available to me, I kinda feel gipped, especially when I have other things going on.  And I realize that is the nature of life.  And I suppose one can only just roll with the punches and hope that the next time is better.  Till next year, hopefully.

Description: Set over the course of one school year in 1986, ELEANOR AND PARK is the story of two star-crossed misfits – smart enough to know that first love almost never lasts, but brave and desperate enough to try. When Eleanor meets Park, you’ll remember your own first love – and just how hard it pulled you under. (via Goodreads)

Thoughts: I honestly didn't know what to expect of this book, except that among the bloggers, it was well received and that most people that I read over the past year or heard talk about the book really quite enjoyed it and I didn't really encounter anybody that really disliked the book, but I am sure that there are readers who didn't like the book.  But my impression was that it lived up to the hype.

I Am Half-Sick of Shadows - Alan Bradley

Description:Colonel de Luce, in desperate need of funds, rents his beloved estate of Buckshaw to a film company. They will be shooting a movie over the Christmas holidays, filming scenes in the decaying manse with a reclusive star. She is widely despised, so it is to no one's surprise when she turns up murdered, strangled by a length of film from her own movies! With a blizzard raging outside and Buckshaw locked in, the house is full of suspects. But Flavia de Luce is more than ready to put aside her investigations into the true identity of Father Christmas to solve this yuletide country-house murder. (via Goodreads)

Thoughts: Really liked it, as usual.  I am a big fan of this series and so glad I have made the effort to catch up with the s…
Post a Comment
Read more

What I have reviewed this past week:
1) Behind the Scenes at Downton Abbey by Emma Rowley (review)


Books I plan on working on this coming week:
• The Count of Monte Cristo
Post a Comment
Read more

Listening to: Not much lately

Eating: Nothing at the moment, but I am getting hungry, so I'll probably have something as soon as this is done.

Reading: Am planning on finishing up Eleanor & Park this afternoon

Planning: Whether I should go and see Catching Fire on Wednesday evening

Feeling: Like I just want to sit and relax for a few hours and catch up on my PVR

Loving: The fact that the sun out and that its not raining

Wanting: To get over this cold that I have had for the past week and a half

Thinking: Not much at this point

Looking forward to: The Thankfully Reading Reading Weekend hosted by Jenn's Bookshelves that starts on Thursday.

Reviews:
• Behind the Scenes at Downton Abbey by Emma Rowley (review)

Behind the Scenes at Downton Abbey - Emma Rowley 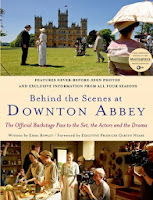 Expertly crafted with generous inside knowledge and facts, this book will delve into the inspiration behind the details seen on screen, the choice of locations, the music and much more. Step inside the props cupboard or the hair and make-up truck and catch a glimpse of the secret backstage world. In-depth interviews and exclusive photos give insight into the actors’ experiences on set as well as the celebrated creative team behind the award-winning drama. Straight from the director’s chair, this is the inside track on all aspects of the making of the show.
Thoughts: A very nice put together book that g…
Post a Comment
Read more

The Christmas Spirit Read-a-Thon hosted by Michelle at The True Book Addict.

To kick off my annual Christmas Spirit Reading Challenge this year, I've decided to have a weekend read-a-thon!
Details:
Read-a-Thon dates: Friday, November 22 at 12:00am CST until Sunday, November 24 at 11:59pm CST (adjust your time zone accordingly)You do not have to be signed up for the Christmas Spirit Reading Challenge to participate (but I sure would love for you to join us!)I am not requiring that you read Christmas/holiday books during the read-a-thon, but I hope you will pick up one holiday tale, even if it's just to read some children's books with your kids or some holiday short storiesto check in on Twitter, we'll use hashtag #CSreadathonas usual, you do not have to have a blog to participate...feel free to link up and check in from Goodreads, Facebook, Twitter, etc.The books that I am planning on reading are:
I Am Half-Sick of ShadowsChristmas at Cold Comfort FarmsThe Snow Chi…
Post a Comment
Read more

What I have reviewed since the last post:
• Call Me Mrs. Miracle by Debbie Macomber (review)

Books I plan on working on this coming week: